Kanizan Bibi is a fragile, mentally ill, 46-year-old woman who has spent over 29 years awaiting execution in Pakistan. Kanizan spent her childhood in Kamalia in the Toba Tek Singh district of Punjab province in Pakistan. Her family barely earned enough to survive. Kanizan’s mother died when she was a child, and her father struggled to provide for her with his meager income as a peasant. He always remembered Kanizan as a timid child who never talked back and always did as she was told. When she started working at age 14, she became one of the principal breadwinners in her family.

Kanizan worked as a housemaid for Khan Muhammad, a rich land-owner, and his family. She spent nearly two years caring for and playing with her employer’s children. According to the accounts of Kanizan and those who knew her, she loved the children dearly. When tragedy struck this family in 1989, she was accused of murdering Khan Muhammad’s wife and five children.

Initially, Khan Muhammad suspected his cousins had committed the murders; they were embroiled in a property dispute at the time of the murders. The cousins were arrested but released only a couple of days later, allegedly after bribing the police officials. Nearly 10 days after the murders, a village elder went to Kanizan’s house at night and told her father the culprits had not been found yet. He said the entire village was on edge and that even though Kanizan was innocent, she would have to go to the police station to answer some questions. Khan Muhammad’s cousins had spread allegations that Kanizan was having an affair with Khan, implying that Khan and Kanizan conspired to kill Khan’s family because of their relationship. At the time Kanizan’s father did not realize that she would be implicated in the case and readily complied with the request of the elder. Kanizan was taken into custody and never returned home. Her employer Khan was arrested around the same time, too.

The police recorded Kanizan’s age as 25, though her family says she was about 16 years old at the time. They claimed she and Khan were wearing blood-stained clothes at the time of their arrests, even though these took place many days after the murders.

Kanizan was severely tortured in police custody for nearly 15 days. The police hung Kanizan from ropes that her father said were thicker than her wrists. Mice were let loose in her shalwar (loose pants) which were tied at the ankles so that the rodents would not be able to escape. She was electrocuted. Villagers living close to the police station said they would hear screams from the station at night. Kanizan was so badly injured that she had to be shifted to a hospital for treatment. Kanizan’s father cursed himself for not being able to afford her bail, and worried that if he had, perhaps she would have been spared some of the torture she endured. Eventually, under torture, Kanizan told her interrogators what they wanted to hear. Her “confession” became the centerpiece of the prosecution’s case.

In January 1991, both Kanizan Bibi and Khan Muhammad were sentenced to death by a trial court in Toba Tek Singh. At trial, the judge did not consider any evidence of her torture. The prosecution painted Kanizan as a violent and unreasonable woman having an affair with Khan, who convinced Khan that he could not simply leave his wife but had to help Kanizan kill his wife and their children. Kanizan’s appeals in the Lahore High Court and Supreme Court were dismissed despite her insistence that she was innocent and despite questions about the reliability of the evidence against her. 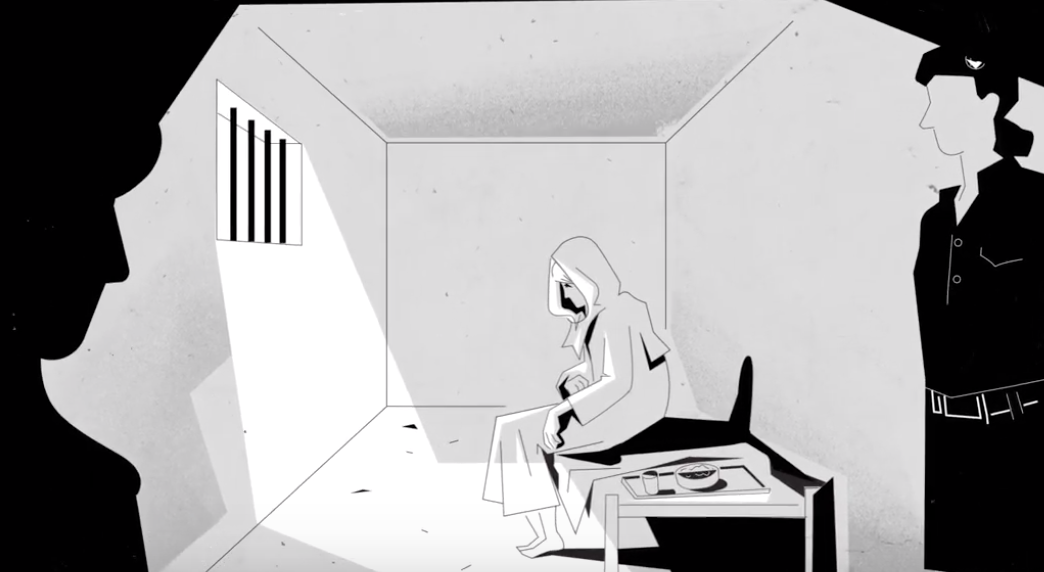 A drawing of Kanizan Bibi in her cell from a video made by the New Media Advocacy Project and Justice Project Pakistan.

In his last statements before he was hanged, Khan Muhammad swore that Kanizan was innocent and that they were not involved romantically. Kanizan’s own death warrant was issued in 1999 but the President halted her execution.

Presently imprisoned at Central Jail Rawalpindi, Kanizan was first diagnosed with schizophrenia in 2000 and was temporarily shifted to Government Hospital for Psychiatric Diseases in Lahore. In 2006, she was shifted from Lahore’s Central Prison to the Punjab Institute of Mental Health (PIMH), and she returned there again in 2018 because of her deteriorating mental health. According to her lawyers and the prison administration, Kanizan suffers from extreme trauma and has not spoken a single word in at least a decade. She has lost touch with reality and is oblivious to her surroundings. There are days when she is unable to eat or dress herself. She trembles, hears voices, and is rarely able to recognize family members.

In 2015, lawyers from Justice Project Pakistan, a legal non-profit defending the most vulnerable prisoners facing the harshest punishments in Pakistan and abroad, came across a newspaper article written by the superintendent of Lahore Central Prison saying that mentally ill prisoners should not be executed. He referred to Kanizan’s case, and Justice Project Pakistan started investigating it. For about three years, JPP wrote letters to the provincial government and sought Kanizan’s medical records. At the time, JPP was already representing two other schizophrenic patients on death row, Khizar Hayat and Imdad Ali.

In April 2018, the Supreme Court of Pakistan recognized that there were mentally ill prisoners on death row and stayed their executions. The chief justice at the time stated that it was “beyond sense or reason that we execute mentally ill individuals.” JPP represented Kanizan in court, as well as Khizar and Imdad.

Two years after the Supreme Court’s decision, Kanizan and Imdad continue to languish in prison on death row. Khizar passed away earlier this year, still on death row, his mind and body ravaged by mental and physical illness. Kanizan is the only woman in Pakistan right now whose death sentence has been confirmed by the Supreme Court, and despite her severe mental illness, she is not getting the specialized treatment to which she is entitled.

Due to the spread of COVID-19, Kanizan’s next court hearing had to be cancelled. She remains on death row, waiting to present a mental health evaluation to the Supreme Court.

Read about Kanzian’s current situation and the dangers posed to her by COVID-19.